JUSTINE HOLLINGSHEAD, CHIEF OF STAFF IN THE DIVISION OF ACADEMIC AND STUDENT AFFAIRS, IS ON LOCATION IN ITALY FOR A UNIVERSITY SCHOLARS STUDY ABROAD TRIP. HER BLOG POSTS WILL APPEAR FROM TIME TO TIME BETWEEN HER ARCHITECTURAL, HISTORICAL, AND GELATO EXPERIENCES.

Some of the most beautiful places in the world – Sorrento and Capri. I have found more than one place that I could actually live in Italy. The first is Florence of course and the second would be Sorrento and/or Capri.

We had the fortunate opportunity to spend the weekend in Sorrento with excursions to Mt. Vesuvius, the island of Capri, and Pompeii. This area is rich with history, including the ancient ruins of Pompeii; has an active volcano called Mt. Vesuvius; and the most beautiful blue grotto nestled in a cave on the island of Capri at the Mediterranean. Not only did we get to go into the grotto, but we also were able to swim in the Mediterranean……only one small mishap with a jellyfish 🙂 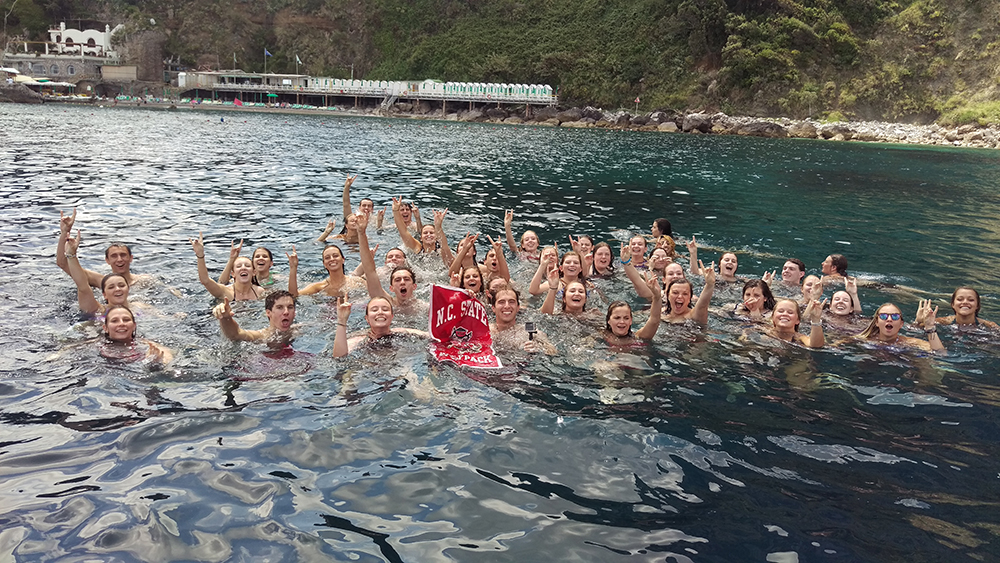 One thing I have learned on this trip is that nothing is close by, regardless of what the guide tells you, and it will always involve an uphill climb. I have been walking 5-8 miles a day for months now, just ask anyone in DASA, but geez louise the hike up Mt. Vesuvius was something else. I am not sure what was worse, the climb up OR back down.  The students have learned that I will never be first, but I will always finish. 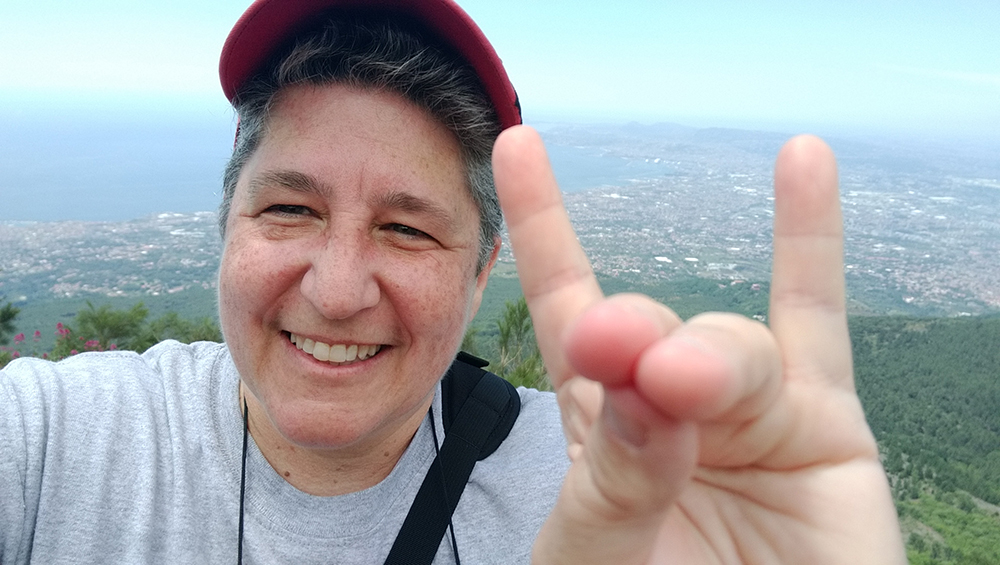 Mt. Vesuvius is critical in the history of Italy, in particular the area of Tuscany, but more specifically to Pompeii. In 79 A.D. Vesuvius erupted, destroyed, and encased what was a vibrant city called Pompeii, including 11,000 inhabitants. The tragedy was well documented because it was witnessed and written about by an Admiral in the Roman fleet.

We know it now as ruins. It was hard to imagine strolling the streets that once were walked by people during the Roman Empire. Much of what has been excavated over the years is in the original condition from the day of the eruption. Imagine one of our students hanging out watching an event. 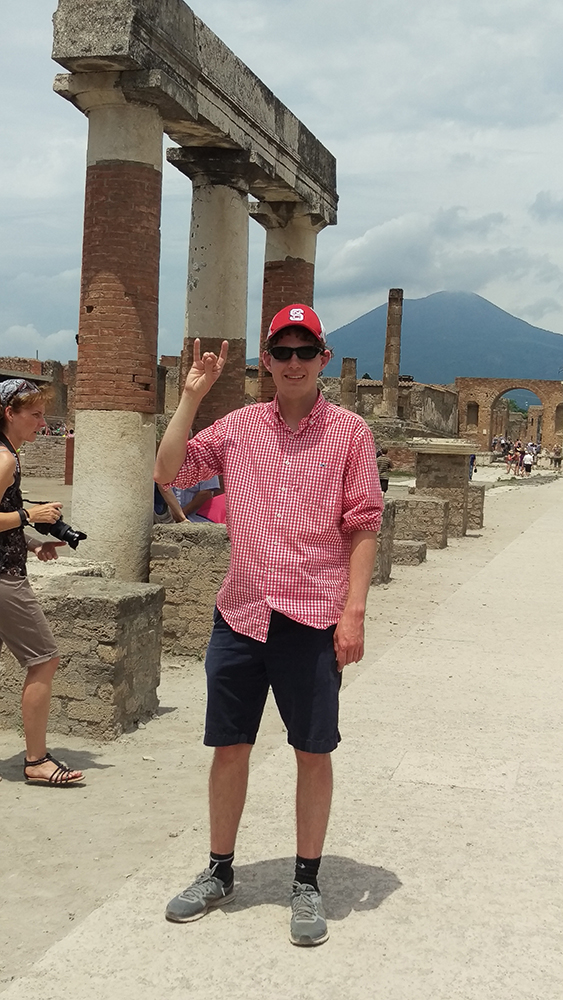 So, one of the most beautiful places that I have ever seen is from the top of AnaCapri which is on the island of Capri. From boat to bus to chairlift, you gracefully arrive atop the 1900+ foot Mount Solaro that overlooks the Mediterranean. On a clear day you can see for miles, including Naples and Sorrento. As we ascended the mountain on the chairlift, we literally rode up into a cloud. It was absolutely breathtaking. 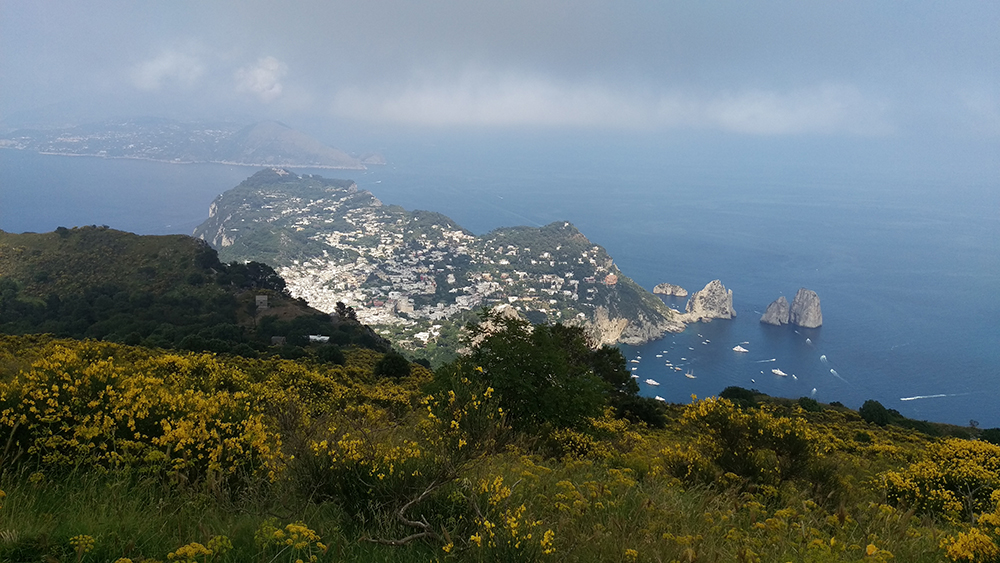 Sorrento is quaint city along the water. You can see all the way to the island of Capri. This area is well known for lemons. It is hard not to miss all of the lemon shops. They put lemon in everything, including chocolate and balsamic vinaigrette. Many of the locals make their own versions of what is called limoncello, which is a strong sipping alcohol founded in Sorrento. The cream version is quite smooth, but what would I know <insert wink here>.

As I round out my time, it is going to be hard to top the experience in southern Italy. I will be headed home soon.

Love is an (Outdoor) Adventure

“I’m Not Sure If You’re Princeton Material”