What makes the Florence study abroad experience unique is that we provide opportunities for the students to engage beyond the classroom. While they are learning the history of the Renaissance in class, we are also taking them to museums, churches, and on short trips to truly experience and live the history. Our first excursions included day trips to Siena, Lucca, and Pisa.

Tuscany is best described as beautiful countryside. As you head south and west of central Florence, you are quickly in rural towns, some more notable than others. Siena is traditional medieval, Pisa has that identifiable leaning tower, and Lucca is encapsulated by well preserved walls as if still of medieval times.

Did you know that the first bank in the world was founded in Siena, Italy? This was back in the middle ages (11th – 14th centuries). Of course, there were no ATMs back then, but banking as we know it today started right here in Italy. The central piazza is called Il Campo with a gothic tower, which we climbed by the way. You might recognize it from movies like the recent James Bond Quantum of Solace. The Campo is world famous for the Palio Run two times during each summer. The Palio horse races date back to the 6th century and are still quite competitive. The horses are well cared for and are of high honor, more so than the jockeys. The horse doesn’t even need to finish the race with the jockey. The piazza itself rivals our NC State Brickyard, yes, more bricks. The students can find a brickyard anywhere. 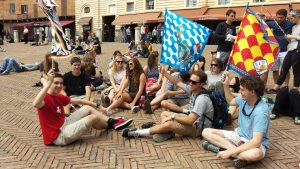 Next stop – Pisa which has more than the leaning tower by the way. There was much fun among the students and myself to capture photos of us pushing it one way or another….quite the site for sure.

The tower is a part of a historic building called, you guessed it, the Duomo.  Rumor has it that the huge incense lamp that is part of the altar was the inspiration Galileo needed in development of his theory of movement. As he gazed at the lamp, it swung gently back and forth like a pendulum and next thing you know…..#theoryofmovement! 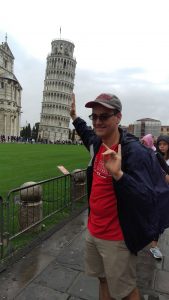 Probably the most fascinating place for me was Lucca. Walls enclose the town itself and they date back to the 13th century. The walls are almost perfectly preserved and function as a tourist attraction. The walls were made for riding….bikes. Of course you are thinking, that wall looks pretty darn wide and you are right. It is a good thing because it had been awhile since some of our students had been on a bike. All 49 of us rode bikes of one type or another, a true bonding experience. I thought it was going to be a narrow path, but alas, open pathway. There were no injuries thankfully, maybe just some pride. The trek around the city on the walls is about 2.5 miles and all flat surface. NOTE: no one was harmed in the making of this video.

So, busy times here in Italy. The students are getting settled into the routine of going to class, sad but true. I am enjoying the experience of living in Florence, even if for a brief time. There is so much to see and do. Until next time friends!

Love is an (Outdoor) Adventure

“I’m Not Sure If You’re Princeton Material”